Why Touching a Dog Is Not Haram: 5 Strong Hadiths

​The dog is considered as a pet among non Muslims in many parts of the world but among Muslims, dogs are despised and even regarded as unclean animals. As a result of having this belief that dogs are filthy animals, most Muslim brothers and sisters in the world go to the extent of treating dogs in a heartless manner where as Islam teaches a Muslim to treat all of Allah's creations mercifully.

Dogs are highly detested by Muslims and Jewish communities thinking that it is an impure animal.  The belief that dogs are impure and should not be touched has led an exaggerated sense of hate towards dogs and the belief that prayers are nullified for a Muslim who touches a dog unless cleaned with sand and water. 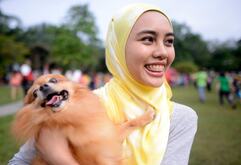 A young Muslim girl holds a dog in Malaysia-Source-Najjua Zulkefli/The Malaysian Insider/www.nytimes.com
Muslims should realize that Allah forgave a  prostitute for giving water to a dog. She took off her sock, tied it to her veil, and drew up some water and Allah forgave her for that.
(Narrated in Bukhari and Muslim)
A very big misunderstanding has arisen as a result of wrongly understanding the hadiths relating to dogs and a wrong analogy has been taken as a result of this misunderstanding.

The Misunderstood hadith
The hadiths that are often quoted has nothing to do with touching a dog. The hadith is as follows.
Narrated by Abu Hurayrah,
“The purification of the vessel of one of you, if a dog licks it, is to wash it seven times, the first time with soil.”
(Sahih Muslim)

In another hadith the prophet (Sal) said,
“If a dog licks the vessel of one of you, let him wash it seven times and rub it with soil the eighth time.”
(Sahih Muslim)

The hadiths mentioned above has nothing to do with a dog being najis or touching a dog. In this hadith, the Prophet (Sal) clearly said that if a dog licks only the vessel, then you should wash the vessel six or seven times with water and one time with soil. It is specifically only when  a dog licks a vessel. Unfortunately this has been interpreted in a way to mean that even if a dog licks you or your cloths then you have to wash seven times with water and then with soil. There is no evidence in the Quran or authentic hadiths to prove that you must wash seven times if a dog licks or touches your clothes or parts of your body whether it is wet or dry. This is an erroneous fatwa. Shaykh ul Islam. Ibn Taymiyyah (Rah) said the following in his book "Majmu al Fataawa-21/530,
"if the wetness of the dog’s hair gets onto one’s garment or body, that does not make it najis"

He also said in Majmu al Fatawa-21/217/ 218,
"That is because the basic principle is that substances are taahir, and it is not permissible to regard anything as naajis or haraam without evidence, as Allaah says (interpretation of the meaning): “while He has explained to you in detail what is forbidden to you, except under compulsion of necessity?”
[al-An’aam 6:119]
“And Allaah will never lead a people astray after He has guided them until He makes clear to them as to what they should avoid”
[al-Tawbah 9:115]"
Many  wrong fatwas have been derived using this hadith. Another argument is that you cannot pray if a dog licks you or if you touch it. This argument has no basis in Islam and mostly the innovators like members of Sufi, Tabligh Jamaath and other heretical sects that make such false claims because they are blind followers of their mureeds or sheikhs and nothing, even the Sunnah of our beloved messenger (Sal) is not accepted until the approval is given by the so called sheikhs and mureeds and false awliya's of these deviated sects.

1. Narrated by Hamzah bin Abdullah,
"My father said. "During the lifetime of Allah's Apostle, the dogs used to urinate, and pass through the mosques (come and go), nevertheless they never used to sprinkle water on it (urine of the dog.)"
(Sahih-Al-Bukhari)
In the above hadith it is clear that dogs urinated in the mosques during the time of the prophet (Sal) and the prophet (Sal) or his companions did not take pains to wash the mosques like how some Muslims are doing nowadays. Islam is a simple and very easy religion to follow. If dogs were impure and the prayers not accepted if a dog touches, then the prophet (Sal) and his companions would not have waited without washing the mosques.

2. In a hadith narrated by Aisha (Rali),
Gabriel (peace be upon him) made a promise with Allah's Messenger (Sal) to come at a definite hour; that hour came but he did not visit him. And there was in his hand (in the hand of Allah's Apostle) a staff. He threw it from his hand and said:
Never has Allah or His messengers (angels) ever broken their promise. Then he cast a glance (and by chance) found a puppy under his cot and said: 'Aisha, when did this dog enter here? She said: By Allah, I don't know He then commanded and it was turned out.
(Sahih Muslim)
In the above hadith the prophet (Sal) told Aisha (Rali) to turn out the dog from the house because angels do not enter a house where there is a dog. If touching a dog was haram then the prophet (Sal) would not have ordered Aisha (Rali) to throw the dog because she would have had to carry it by her hand or the prophet (Sal) would have told her to not touch it.

3. Narrated by Abu Hurayrah (Rali),
the Messenger of Allah (Sal) said:
"Jibra'il came to me and said: "Indeed I had come to you last night, and nothing prevented me from entering upon you at the house you were in, except that there were images of men at the door of the house, and there was a curtain screen with imagines on it, and there was a dog in the house. So go and sever the head of the image that is at the door so that it will become like a tree stump, and go and cut the screen and make two throw-cushions to be sat upon, and go and expel the dog." So the Messenger of Allah (Sal) did so, and the dog was a puppy belonging to Al-Husain or Al-Hasan which was under his belongings, so he ordered him to expel it.
(Tirmidhi and graded Hasan Sahih bu imam Tirmidhi)

5. Abu Hurairah (Rali) reported:
Messenger of Allah (Sal) said, "While a man was walking on his way he became extremely thirsty. He found a well, he went down into it to drink water. Upon leaving it, he saw a dog which was panting out of thirst. His tongue was lolling out and he was eating moist earth from extreme thirst. The man thought to himself: 'This dog is extremely thirsty as I was.' So he descended into the well, filled up his leather sock with water, and holding it in his teeth, climbed up and quenched the thirst of the dog. Allah appreciated his action and forgave his sins". The Companions asked: "Shall we be rewarded for showing kindness to the animals also?" He (Sal) said, "A reward is given in connection with every living creature".
(Sahih-Al-Bukhari and Sahih Muslim)

The prophet (Sal) encouraged the Muslims to be kind to animals including dogs as in this hadith . Islam is a very easy religion and going in to extremes is forbidden in Islam. In a hadith narrated by Ibn Masud (Rali),
The prophet (Sal) said,
"Doomed are the extremists. He said this three times"
(Sahih Muslim)

Narrated by Abu Hurayrah,
The prophet (Sal) said,
"Religion is very easy and whoever overburdens himself in his religion will not be able to continue in that way. So you should not be extremists, but try to be near to perfection and receive the good tidings that you will be rewarded; and gain strength by worshipping in the mornings, the afternoons, and during the last hours of the nights."
(Sahih Al Bukhari)
From all the evidence from the Quran and the authentic hadiths, it is clear beyond doubt that you can touch a dog and a dog is not filthy.
﻿ ﻿