Teaching Salah for a girl or boy generally begins when the child reaches seven years. Many religious schools teach children as young as four to read the Quran or to pray using corporal punishment. Corporal punishment is mostly banned in developed western countries but in the Muslim world, the ultra conservative upbringing of many Muslims have given the impression that corporal punishment should be given to a child who does not want to pray.

Before explaining the misunderstanding surrounding beating children who turn seven years, let me give a breif vidsual guide with images on the easy step by step guide on teaching Salah. 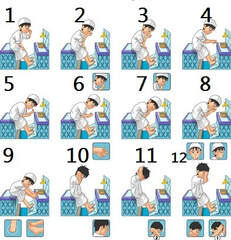 The above twelve visual images can be used to slowly teach Wudhu for little children. Always be patient and kind and stop when the child gets uneasy.

​Visual Images For Teaching Salah For a Kid 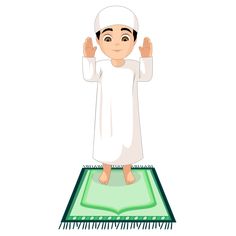 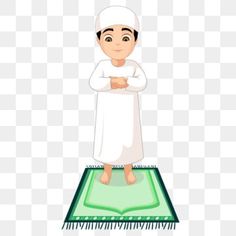 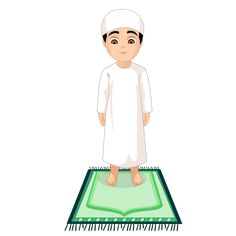 15. Before going to Sujud (Prostration) 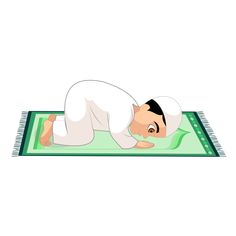 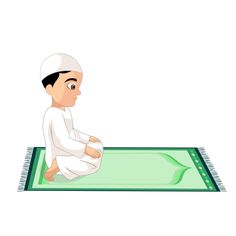 18. Tashahhud
The Controversy of Teaching Salah for a seven year old kid.
Teaching Islam to children is something that has been told by many Muslim preachers  and this has been sometimes a topic that is spoken  in Jumuah kuthba's where the imam in most cases gives a negative image of children as if they are animals and then the most famous hadith with regards to beating children is quoted.
Narrated by Amr bin al As(Rali), The prophet (Sal) said,
"Command your children to pray when they become seven years old, and smack them for it (prayer) when they become ten years old; and arrange their beds (to sleep) separately."
(Abu Dawud-Graded Hasan Sahih by Albani)

The above hadith is used to encourage parents to hit their children if they do not pray when they are ten years old. The above hadith should be understood in the right context. What needs to be understood from the above hadith is that the prophet (Sal) told to smack the child lightly not in a way that would harm the child. Abdullah ibn Amr (Rali) narrated,
The prophet(Sal) said,
“Whoever does not show mercy to our young ones, or acknowledge the rights of our elders, is not one of us.”
(Musnad Ahmed-Graded Sahih by Ahmed Shakir)

Amr bin al Ass (Rali) narrated,
The prophet (Sal) said,
'Those who do not show mercy to our young ones and do not realize the right of our elders are not from us. "
(Abu-Dawud- Graded Sahih by Albani)

Fro the above two hadiths it is clear that the prophet (Sal) commanded to show mercy towards those who are young ones such as children. The smacking is something that is light like a pat and should not be a beating that should harm the child's body. The prophet (Sal) said,
"When one of you inflicts a beating, he should avoid striking the face. "
(Abu Dawud-Graded Sahih by Albani)

Narrated by Abu Hurayrah(Rali), the prophet (Sal) said,
“When any one of fights his brother, let him avoid the face, for Allah created Adam in His image.”
(Sahih Muslim)

From the above hadiths it is clear that it is forbidden to slap or harm children and the smacking is that is done lightly. The prophet (Sal) never beat any child and he showed love towards children. Abu Hurayrah(Rali) narrated,
"The Prophet (Sal) kissed his grandson Hasan bin 'Ali in the presence of Aqra' bin Habis. Thereupon Aqra' remarked: "I have ten children and I have never kissed any one of them." The Messenger of Allah (Sal) cast a glance upon him and said, "He who does not show mercy to others, will not be shown mercy."
(Bukhari and Muslim)

Yahla Ibn Mura(Rali) narrated,
“I went out with the Prophet -prayers and peace of Allah be upon him- for a food invitation. Al-Hussain son Ali was playing in the street, whereupon the Prophet hurried in front of the people towards him to catch him while Al-Hussain running right and left to escape. Moreover, he used to take Osama Ibn Zaid and Al-Hassan Ibn Ali and place them on his thighs then he would tightly hug them and say: “O Allah have mercy on the as I have mercy on them.”
(Sahih-Al-Bukhari)

From the above hadith the prophet (Sal) struck the thigh of the sahabi with regards to delaying prayer and this is how it should be understood by the word "striking" or " beating".
Sheikh Albani said,
Beating and spanking is not (allowed) at all. Instead the child should be advised. Sometimes words have a greater affect on people than hitting. And sometimes hitting does not help at all, rather it makes them persist in doing that. The best guidance is the guidance of Muhammad (Sal). The child should not be hit as long as he did not reach the age of puberty
(From the audio lecture  “La Qushoor Fil Islam.” )

Ibn Qadamah said,
"This telling and discipline is prescribed in the case of children in order to train them to pray, so that they will be used to it and it will become their habit, and they will not forsake it when they reach puberty."
(Al-Mughni -1/357)

Sheikh Uthaymin said,
"What is meant by smacking here is smacking that is not painful, a light smack that serves the purpose and does not cause any harm"
(Liqa’ al-Baab il-Maftooh-95/18)

The next point in teaching prayers fro children is that it is not an obligation to tell the children to pray because there is an opposing hadith.
Narrated by Ali (Rali),
The prophet(Sal) said,
“The pen is lifted from three people: a sleeping person until he awakens, a child until he becomes an adult, and an insane person until he regains his sanity.”
(Tirmidhi-Graded Saih by Albani)

and in another hadith, the prophet (Sal) said,
“The Pen has been lifted from three: from the sleeper until he awakens, from the child until he reaches puberty and from the insane person until he comes to his senses -- or until he comes round.”
(Abu Dawud,Al-Nasai and others and Graded Sahih by Albani in Sahih Abu Dawud)

From the above hadiths it is clear that a child requiring to pray is after he or she reaches puberty and this is correct as well because a person's actions are recorded by the angels only after puberty and from this it is clear that learning to pray will be required after puberty. Separating the beds is not a must as the prophet (Sal) did not order but tell to separate the beds when kids reach ten years old. As for the hadith of the prophet (Sal) telling to command the children to pray at seven years could be understood from the below hadith,

Narrated by Aisha (Rali)
The Prophet (Sal) ordered his companions after the battle of Al-Ahzaab saying, “No one of you should pray Asr until you reach the village of Bani-Qurayzah (A Jewish tribe) .”While they were on their way, the time of Asr came. Some companions said we should not pray until we reach Bani-Qurayzah. Others said we should pray Asr now because the Prophet (Sal) did not mean for us to leave the Asr prayer, but he wanted us to be in a hurry. So some of the companions prayed Asr , while others continued on until they reached Bani-Qurayzah after sunset. When they went back to the Prophet, they mentioned to him the story, He accepted the action of all of them."
(Bukhari and Muslim)

From this hadith it is clear that the prophet (Sal) accepted both the actions and the action of not teaching a child to not pray until he reaches puberty is  also acceptable. This action of a person learning to pray until he or she reaches puberty is better because it is more merciful than that of commanding a child to pray at seven years because in a narration narrated by Aisha (Rali), In which she said,
“Whenever the Prophet (Sal) was given a choice between two matters, he would (always) choose the easier as long as it was not sinful to do so"
(Bukhari and Muslim)

This hadith only explains that each person has a share of responsibility and teaching children to pray has nothing to do with hadith. Some try to argue that the parents will also be responsible if the child goes astray. This is wrong because the duty of the parents is only to advice the child. Even prophet Nuh (Noah)'s wife and son were disobedient and ended up as disbelievers. Allah(Swt) says with regard to this in the Quran,
"Allah sets forth an example to those who disbelieve: the wife of Noah and the wife of Lot, they were both under two of Our righteous servants, but they acted treacherously towards them so they availed them naught against God, and it was said: Enter both the fire with those who enter."
(Al-Quran-66:10)

"Allah told the story thus: And he (Noah) said: "Embark therein, in the Name of Allah will be its moving course and its resting anchorage. Surely, my Lord is Oft-Forgiving, Most Merciful." So it (the ship) sailed with them amidst the waves like mountains, and Noah called out to his son, who had separated himself (apart), "0 my son! Embark with us and be not with the disbelievers." The son replied: "I will betake myself to a mountain, it will save me from the water." Noah said: "This day there is no savior from the Decree of Allah except him on whom He has mercy." And a wave came in between them, so he (the son) was among the drowned.
And Noah called upon his Lord and said, "0 my Lord! Verily, my son is of my family! And certainly, Your Promise is true, and You are the Most Just of the judges." He said: "0 Noah! Surely, he is not of your family; verily, his work is unrighteous, so ask not of Me that of which you have no knowledge! I admonish you, lest you be one of the ignorant."
Noah said: "O my Lord! I seek refuge with You from asking You that of which I have no knowledge. And unless You forgive me and have Mercy on me, I would indeed be one of the losers."
(Al-Quran-11:45-47)