Awrah for Men Among Men and Women Among Women: 4 Answers

18/10/2018-Updated-16/06/2020
​
The word "awrah" generally means nakedness and every form of society has some rule or regulation with regards to nakedness. The awrah mentioned in Islam is the area that needs to be covered and it differs among men and women according to the situation or whether the person is a Muslim or not.

Lets examing in detail how and when the awrah differs among  men and women.
1. Awrah for women in front of women 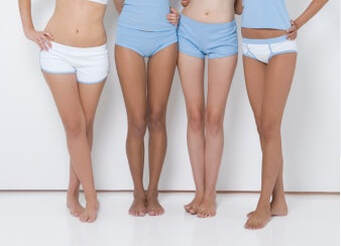 The above fatwa of Imam Uthaymin is only his opinion and there is no evidence from the Quran and the Sunnah to prove that a women cannot wear a short dress in front of other women.
2.Awrah for men in front of men.

The awrah for a man in front of another man is only his private parts
The awrah for men in front of men us the same as that women and that is the private parts. Its based on the same hadiths as mentioned above for women. Some scholars are of the view that the awrah for men is what is between the navel and the knees. This argument could be accepted if there are no opposing evidences but the truth is there are many hadiths stating otherwise. The hadiths proving that the Thigh is not an awrah is  as follows.

Narrated by Aisha (rali):
"The Prophet was sitting with his thigh exposed when Abu Bakr asked, and received permission to enter. The same thing happened with 'Umar. However, when Uthman sought permission to enter, the Prophet covered himself with his clothes. When they left, I said, 'O Messenger of Allah, you permitted Abu Bakr and 'Umar to enter while your thigh was exposed. When 'Uthman asked permission to enter, you covered yourself with your clothes.' He said, 'O 'Aishah, should I not be shy of a man who, by Allah, even the angels are shy of'?"
(Bukhari,Muslim and others)

If the thigh was the awrah the prophet (sal) would have not touched it. Based on these evidences it is very clear that the thigh is not an awrah and this view was supported by scholars like sheikh Salih al Uthaymin,Ibn Jareer,Ibn Hazm and others.

3.The awrah for a woman in front of mahram men such as father,brother etc.

Narrated by Muawiah ibn Haydah,
" I said : Apostle of Allah, from whom should we conceal our private parts and to whom can we show? He replied : conceal your private parts except from your wife and from whom your right hand possesses (concubines). I then asked: Apostle of Allah, (what should we do), if the people are assembled together? He replied: If it is within your power then no one will look at it, then you should try that no one can look it. I then asked: Apostle of Allah, if one of us is alone? He replied: Allah is more entitled than people that bashfulness should be shown to him (feel shy more to Allah than to people)."
(Abu Dawud and Tirmidihi and others and authenticated by Albani)

Based on the above hadith t i clear that the awrah for a women or man in front of the mahram is the private parts. Some scholars are of the view that a women may show her neck,hands, head to this category as mentioned in the verse mentioned above and not anything else but there is no sound evidence from the sunnah of our messenger (sal) stating such a thing and what is evident from the authentic hadith is that her private parts is what she should conceal. Another important thing that needs to be mentioned is that slave women need not cover their heads because hijab is only for the free believing women.

Anas (rali) reported: ‘Umar (rali) once saw a slave-girl that belonged to us (to Anas) wearing a scarf, so Umar poked her and told her: ‘Don’t assume the manners of free woman.”
(Musannaf Ibn Abi Shaybah-Graded Sahih by Albani in irwa al ghaleel)

Anas (rali) narrated:
“The slaves of `Umar (rali) used to serve us with their hair uncovered and hitting their breasts.”
(Baihaqi Sunan wal Kubra-authenticated by Albani in al irwa)

4. Elderly women who have passed child bearing age need not wear the hijab.

Allah says in the Quran
“And as for women past childbearing who do not expect wedlock, it is no sin on them if they discard their clothing in such a way as not to show their adornment. But to refrain is better for them. And Allaah is All‑Hearer, All‑Knower”
(24:60)

From the above verse a women who has passed the childbearing age and has no intention to marry can uncover her head and not wear the hijab in front of non mahram men. This also includes for women with or without husbands.
Apart from this a women can be naked in front of a blind man or a child who is not mature enough to know about nudity. Allah (Swt) says:
"And say to the believing women that they should lower their gaze and guard their modesty; that they should not display their beauty and ornaments except what (must ordinarily) appear thereof; that they should draw their khimār over their breasts and not display their beauty except to their husband, their fathers, their husband's fathers, their sons, their husbands' sons, their brothers or their brothers' sons, or their sisters' sons, or their women, or the slaves whom their right hands possess, or male servants free of physical needs, or small children who have no sense of the shame of sex"
( 24:31)
The prophet (sal) told Fathima bint Qays(rali) to observe her iddah in Ummu Makthoum (rali)'s house by saying:
"for he is a blind man and you can take off your garment.”
(Sahih Muslim and others)