"And why should you not eat of that (meat) on which Allaah’s Name has been pronounced (at the time of slaughtering the animal), while He has explained to you in detail what is forbidden to you, except under compulsion of necessity?”
(6:119)

And
"He has only forbidden you carrion, blood, and swine, and that which has been consecrated to any other than Allah. But who is driven by necessity, neither craving nor transgressing, it is no sin for him. For Allah is Forgiving, Compassionate."
(2:173)

And again
“Whoever disbelieved in Allah after his belief, except him who is forced thereto and whose heart is at rest with Faith but such as open their breasts to disbelief, on them is wrath from Allah, and theirs will be a great torment”
(16:106)
The above verses clearly explains that things which are haram becomes halal for a necessity If there is no transgression. In this instance watching porn becomes a necessity and it cannot be regarded as transgression. There are many hadiths which proves that even major sins are halal when there is a necessity and this is the basic Asl (Principle). This was also the understanding of the Salaf.
"Narrated Anas (rali):
The Prophet (sal) allowed `Abdur-Rahman bin `Auf and Az-Zubair bin Al-`Awwam to wear silk because they were suffering from an itch" .
(Sahih Al Bukhari)

‘A woman was brought to ‘Umar bin al Khattab May Allah be pleased with him who had been extremely thirsty, and had passed by a shepherd and asked him to give her something to drink; he had refused to give her something to drink unless she let him have his way with her. (Umar) consulted with the people as to whether he should have her stoned. ‘Ali May Allah be pleased with him said, ‘She was forced to do it, you should let her go.’ So he did so."
(Sunan Baihaqi-Uthenticated by Albani in Irwa al Ghaleel 7/341)

In the above hadith it is clear that when the women who had committed zina due to her thirst, Umar (Rali) never criticised her by saying "Are you going to die because of your thirst" or Umar (Rali) or Ali (Rali) never found fault with her for committing adultery to quench her thirst. This hadith clearly proves that if there is a reason of necessity then the haram becomes halal. The same can be said about watching porn.
From the above hadiths it is clear that necessity dictates exception when watching real life porn. Watching the awrah is allowed due to a necessity. The below hadith proves this.
Abdul-Malik is reported to have said,
"I heard 'Atiyya Al-Quradhi saying: We were presented before Allah's Messenger (sal) on the day of Quraidha (The story of the tribe of Banu Quraidha). He who had hair grown on pubes was killed, and he who had not hair on pubes, was let off. I was among those who had not attained puberty, so I was let off to go away.”
(Sunan ibnu Majah, Hadeeth 2541-with a saheeh isnaad)
Stripping naked a women or man when there is a necessity to do so to determine something as mentioned in the below hadith is also allowed.
Narrated by Ali(Rali): "Allah's Messenger (sal) sent me, Abu Marthad and Az-Zubair, and all of us were riding horses, and said, "Go till you reach Raudat-Khakh where there is a pagan woman carrying a letter from Hatib bin Abi Balta' a to the pagans of Mecca." So we found her riding her camel at the place which Allah's Messenger (sal) had mentioned. We said (to her),"(Give us) the letter." She said, "I have no letter." Then we made her camel kneel down and we searched her, but we found no letter. Then we said, "Allah's Messenger (ﷺ) had not told us a lie, certainly. Take out the letter, otherwise we will strip you naked." When she saw that we were determined, she put her hand below her waist belt, for she had tied her cloak round her waist, and she took out the letter, and we brought her to Allah's Messenger (Sal) Then `Umar said, "O Allah's Apostle! (This Hatib) has betrayed Allah, His Apostle and the believers! Let me cut off his neck!" The Prophet asked Hatib, "What made you do this?" Hatib said, "By Allah, I did not intend to give up my belief in Allah and His Apostle but I wanted to have some influence among the (Mecca) people so that through it, Allah might protect my family and property. There is none of your companions but has some of his relatives there through whom Allah protects his family and property." The Prophet (Sal) said, "He has spoken the truth; do no say to him but good." `Umar said, "He as betrayed Allah, His Apostle and the faithful believers. Let me cut off his neck!" The Prophet (sal) said, "Is he not one of the Badr warriors? May be Allah looked at the Badr warriors and said, 'Do whatever you like, as I have granted Paradise to you, or said, 'I have forgiven you."' On this, tears came out of `Umar's eyes, and he said, "Allah and His Apostle know better."
(Sahih Al Bukhari and Abu Dawud- Graded Sahih by Albani)

"Allah intends for you ease and does not intend for you hardship"
(2:185)
Nowadays if a muslim brother or sister watches porn and if somebody catches it, then they are criticised to such an extent and sometimes even assaulted causing physical and emotional trauma. these muslims who preach puritanism will go in to demeaning and even telling this secret to all the others without knowing that a muslim must hide the faults of his fellow brother. Definietly this way of behaiour is not Islamic. Fadl Bin Abbas (Rali) the younger brother of Ibn Abbas (Rali) was riding behind the Prophet on his she -camel, “...a beautiful woman from the tribe of Khath’am came, asking the verdict of Allah’s Messenger. Al-Fadl started looking at her as her beauty attracted him. The Prophet looked behind while Al-Fadl was looking at her; so the Prophet held out his hand backwards and caught the chin of Al-Fadl and turned his face (to the other side) in order that he should not gaze at her...”
(Sahih Al Bukhari and others).

"Actions are according to intentions"
(Sahih Al Bukhari)

" The Prophet (sal) said, “Verily Allah has obligated the obligations – so do not neglect them. And He has limited the limits – so do not transgress them. And His silence about things is from His mercy, not forgetfulness, so do not investigate them.”
(Hasan sahih-Ad-Darqutni No. 4/199 and Al-Baihaqi No. 10/122).

Abdullah Ibn Masood(rali) narrated that the prophet (sal) said:
“No woman should look at another woman then describe her to her husband so that it is as if he is looking at her".
(Sahih Al Bukhari)

In the above hadith the prophet (sal) forbade looking at the women when describing her to her husband because the husband could look at the women lustfully and this has nothing to do with a drawing or anything similar.  The other argument is based on the word Fahisha (Lewdness,Obscenity etc). They argue that animated porn is also a form of Fahisha. I would like to ask them in which verse in the Quran or sahih hadith does it say that looking at nude pictures is Fahisha. Fahisha is what Allah (swt) and his messenger (sal) has mentioned as Fahisha and not someone's opinion or assumption.  This is what Allah (sawt) says in the Quran with regards to Fahisha.

" And come not near to the unlawful sexual intercourse. Verily, it is a Fahishah"
(17:32)

"Say: The things that my Lord has indeed forbidden are: shameful deeds whether open or secret sins"
( 7:33 )

What Allah (swt) or his messenger (sal) has not forbidden cannot be made forbidden by anyone. 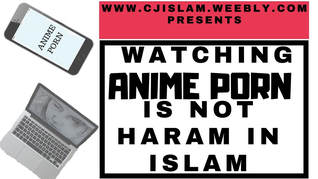